After nearly a decade of fraternal fighting, al-Ashraf had died in 1237, leaving al-Kamil the victor in the Ayyubid power-struggle — until he died a year later. The Ayyubid empire at once disintegrated again into warring factions, this time with the brothers, sons and nephews of al-Kamil at each other’s throats just as Frederick II’s truce with al-Kamil expired in 1239. A golden opportunity had just opened up for crusades-minded knights and nobles in the West. 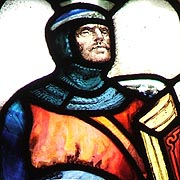 Since the end of Frederick II's truce had been anticipated for some time, large contingents of crusaders started to arrive to resume hostilities almost at once. These included a substantial army under a number of prominent French nobles, the most senior of which was Thibaut, Count of Champagne and King of Navarre. The factions within the Kingdom of Jerusalem temporarily overcame their differences and joined these forces to confront the Ayyubids. The latter, meanwhile, re-occupied the defenseless Jerusalem in December.

Despite a defeat at Gaza in November (caused by crusaders foolishly ignoring the advice of the Masters of the Military Orders and their own senior commanders), Navarra took advantage of infighting among the Ayyubids to obtain a highly advantageous treaty with al-Kamil’s brother al-Salih Ismael. This restored to Christian control the hinterland behind Sidon, the castles of Beaufort, Belvoir, and Safad, the towns/castles of Toron and Tiberias, along with obtaining promises of the surrender of Jerusalem, Bethlehem, Nazareth, and Galilee to Frankish control in exchange for Frankish help in defeating Ismael’s cousin Da’ud, who had taken control in Damascus. The crusaders rapidly re-establishing control in the northern territories and started to raid into Galilee. Da’ud came under enough pressure to likewise make concessions to the crusaders in exchange for peace. In late summer 1240, he signed an agreement that ceded to the crusaders nearly everything that had belonged to the Kingdom of Jerusalem in 1187, except the region around Nablus (which was predominantly Muslim) and the Transjordan. The treaty may, however, have included dangerous clauses about providing assistance to Da’ud in a war against his cousin Ayyub, who had recently seized power in Egypt.

Meanwhile, in October 1240 an English force composed of 800 knights led by Richard, Duke of Cornwall, sailed into Acre. Cornwall was not only the brother of King Henry III of England, he was the new brother-in-law of Frederick II since the marriage of his sister Isabella to Frederick in July 1235. He was accompanied by another brother-in-law, the husband of his sister Eleanor, Simon de Montfort, Earl of Leicester. Cornwall rebuilt the citadel at Ascalon and opened the lines of communication to Da’ud only to discover the latter no longer needed crusader assistance and was not inclined to honor the terms of the agreement he’d signed with Navarre. Cornwall promptly switched tack and accepted a deal offered by Ayyub of Egypt that included a prisoner-exchange, including prisoners captured at the fiasco at Gaza the previous year. Cornwall demonstratively sided with Frederick II in his conflict with the rebellious barons of Outremer and handed over Ascalon to Frederick’s representatives before departing the Holy Land on 3 May 1241 bound for England via Sicily.

Significantly and enigmatically, however, he carried with him a proposal signed by Balian of Beirut and other leading rebel barons, which put forward a proposal to end the dispute between the barons and the Emperor. The rebel barons laid out conditions for reconciliation as follows: 1) a full pardon for all rebels including the Ibelins, 2) the appointment of a baillie acceptable to them who would hold power in the entire kingdom until Conrad came to the kingdom in person, and 3) the promise that the interim baillie swear to uphold the laws and customs of the kingdom. In exchange, the lords and burgesses of Jerusalem would swear to obey Frederick’s baillie. Most important, the letter identified by name the Imperial baillie they were willing to accept, namely, Frederick’s brother-in-law Simon de Montfort. Frederick ignored the letter and no more is heard of the proposal.

We can only speculate on what Montfort had done or said to win the support of the rebel barons, but it is undoubtedly significant that he shared a cousin with the leader of the rebel barons, Balian of Beirut. More intriguing, in light of Simon de Montfort’s later role as the leader of a baronial revolt in England, it appears that Balian of Beirut and his spirit of rebellion against arbitrary royal authority impressed Simon de Montfort as much as the other way around.

The bulk of this entry is an excerpt from Dr. Schrader's comprehensive study of the crusader states.

Order now!
Dr. Helena P. Schrader is also the author of six books set in the Holy Land in the Era of the Crusades.